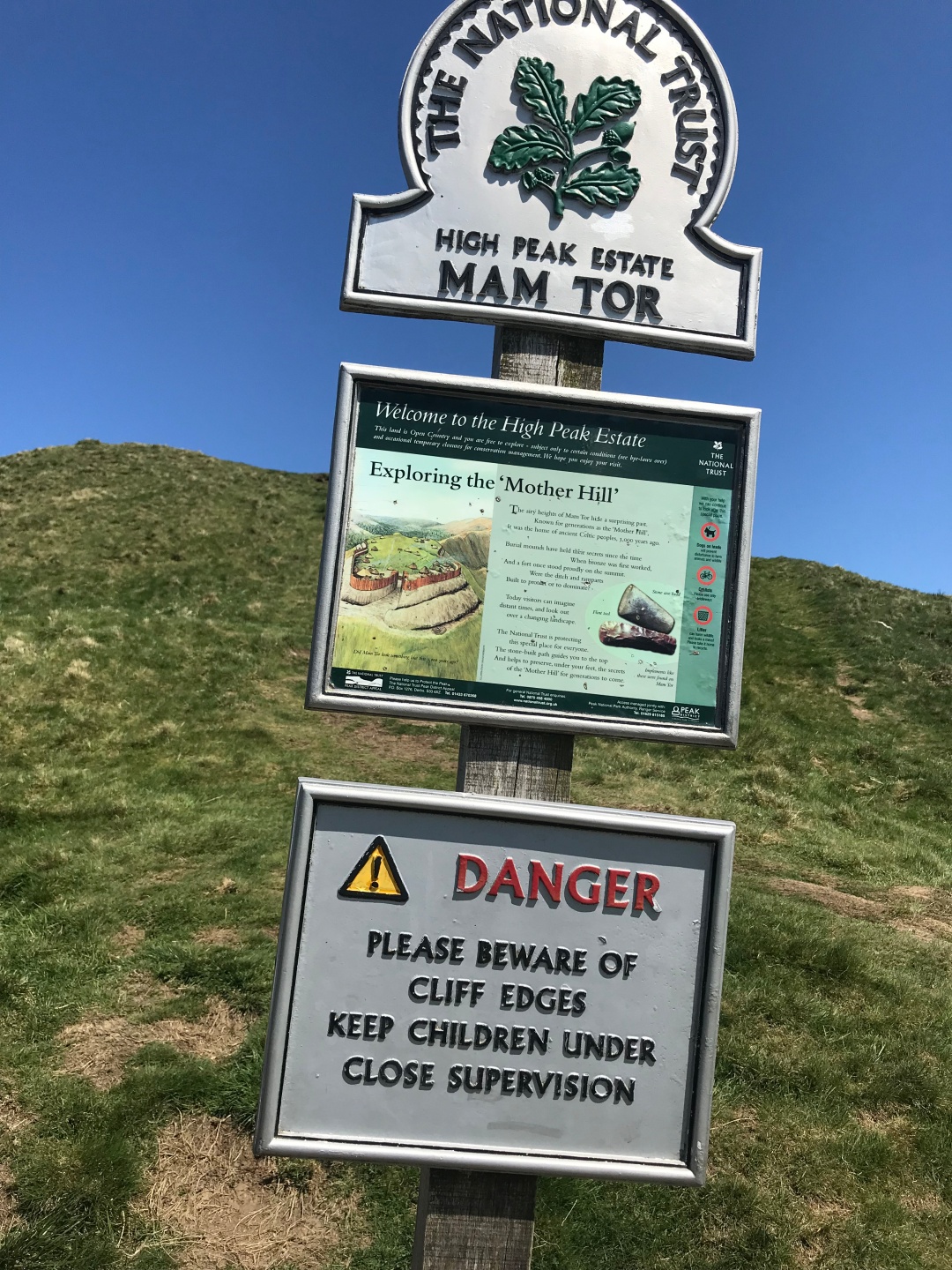 Learning the hard way: An adventure in the Peak District

This is the story of a little adventure.

A solo run in the Peak District, on a random Tuesday in May.

In a place I hadn’t thought about for many years until chief Cat Jana, (@trainersoverheals), put a post on FB saying that she would be leading a group around the Edale Skyline.  I was instantly excited.  Alas my excitement was short lived as the date she picked was when I would be returning from work in Monte Carlo.  My heart sank a little as I remembered something I hadn’t thought about for a while.

Flashback to a 10 year old Jon and a school trip to Castleton, where as a group we walked Mam Tor and Kinder Scout on two mini adventures.  I remember being in awe of the landscape and the majestic beauty of Mam Tor.  So much so, that when I returned to class and started on a class project about the trip I asked if I could make a clay model of the mountain.  I had such fun crafting this piece and then painting it.  I wonder if this is where my love of mountains started? I know my vertigo also kicked in up there on those peaks, but also a desire to climb them was strong.

As life moved on I soon forgot about it though…until that moment, when I thought I could see it again, then couldn’t.

Over the next few days an idea brewed in my mind.  I had the Tuesday off work after coming back from the trip and I didn’t have anything particular planned.  The idea turned into a thought… could I do something different?  Could I go on an adventure, on my own?  I contacted Jana to see if she could send me the gpx file for the route, which she very kindly sent.  I looked over it with excitement and a little trepidation, it was a 30-ish km route with plenty of elevation but there it was, about halfway along, the summit of Mam Tor.  So it was at this point I said to myself and to Gillian that I was going to attempt to run this.  Most probably solo.

Well, let’s just say, I got home at 21.50 exhausted, covered in cuts and full of memories from an epic solo adventure… 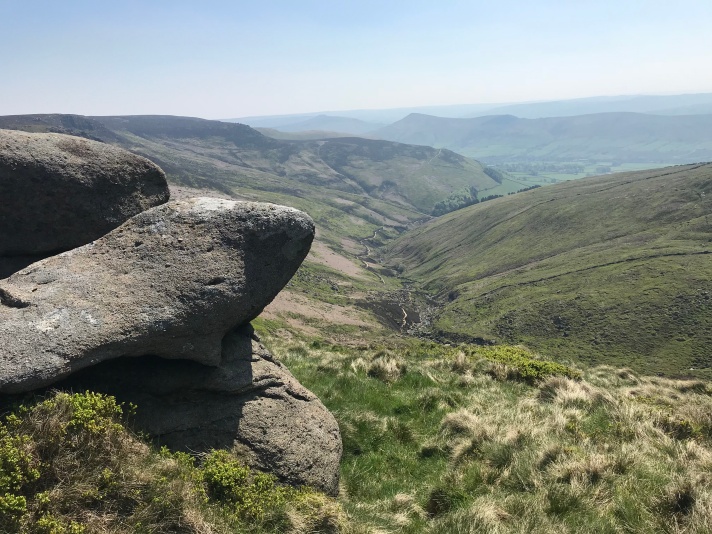 …oh you want to know more? Ok, well I am going to break this down into sections as I hope others can learn from my experience and mistakes. I know I certainly have.

I have quite a bit of outdoor experience from my Scouts and hiking days.  I am pretty experienced hiking wise and can read terrain quite well. With this in mind I packed the following kit in my Hydration vest:

I knew it was going to be a warm day, so I filled up my 1.8L bladder with water, added two 250ml flasks of electrolyte.

Fuelling wise I took: 2 gels, 1 sausage roll, a small bag of trail mix and a tribe bar. I want to start experimenting with different fuelling.

I applied factor 30 sunscreen but DIDN’T take the bottle!

Before this adventure my trail runs have mostly been woodland and hills but soft ground with some stony sections. I have run a fair amount of elevation but nothing compared to this. It was so varied, so rugged.  One minute I would be jogging along a flat slab path, the next negotiating peat bogs or sharp stone trails. It was harsh but beautiful. It takes a lot of concentration and coordination to run here.  I was sensible though and only ran where I felt safe to do so, as I didn’t want to roll my ankles.

The climbs were hard but the views rewarding, this is why we climb right?

I wore my newish Salomon SLAB Ultra’s.  At first I was worried they might not be right for the job but with the variety of surfaces, they did really well in keeping me gripped to the ground and had the cushioning for a longer run.

I do wish I had spoken to Jana about the type of terrain before heading up, it wouldn’t have been such a shock to me then. I guess I was just expecting to run dirty trails on top on the Hills. Doh!

I had planned the route based on the gpx Jana had sent me and made some modifications using the OS online route planner.  I then used my Garmin GPS watch to guide me, which for the most part was perfect.  I should have paid more attention to the planning of the start though as this is where I made my most fatal error.

Running up from the village of Edale, you head out to the lower farmland before starting the climb up.  For some reason I set the route off the main trail and onto a very minor trail.  This went up the edge of a stream/gully.  Soon the trail disappeared.  I should have turned round and gone back to the main trail.  I didn’t!

Instead I bullishly continued up and up. The gradient was very steep, I was on my hands and knees climbing rocks, heather, through water and peat.  I shredded my legs but didn’t notice until later.  Then I reached the top…I rested and looked up, shit, there was still more to go.  Another gull, more heather and peat later and I was finally at the top.

2 KMs with 284m of elevation took about 37 minutes. This was brutal, but the view, was to die for.

I found the main path and after taking in the views and getting my breath back I set off.  It essentially follows the ridge line around Edale and you get to see so much with 360 degrees.  Like I said, the running was hard and sometimes just impossible. I encountered a large Ram up on some rocks, said hello to fellow explorers, included a lovely couple of guys who jested with me around Kinder Scout.  I started finding my feel of the ground though after initially being annoyed about not being able to run much.

The longest part I ran was out on a moor, which was a path of slabs that went on for a couple of KMs around Brown Knoll and Horsehill Tor. Then there was a slow ascent before the magnetic Mam Tor came into view.

This was the sight I had been waiting for, I had kind of seen it in the distance from the other side of the rim but now it was here in front of me. 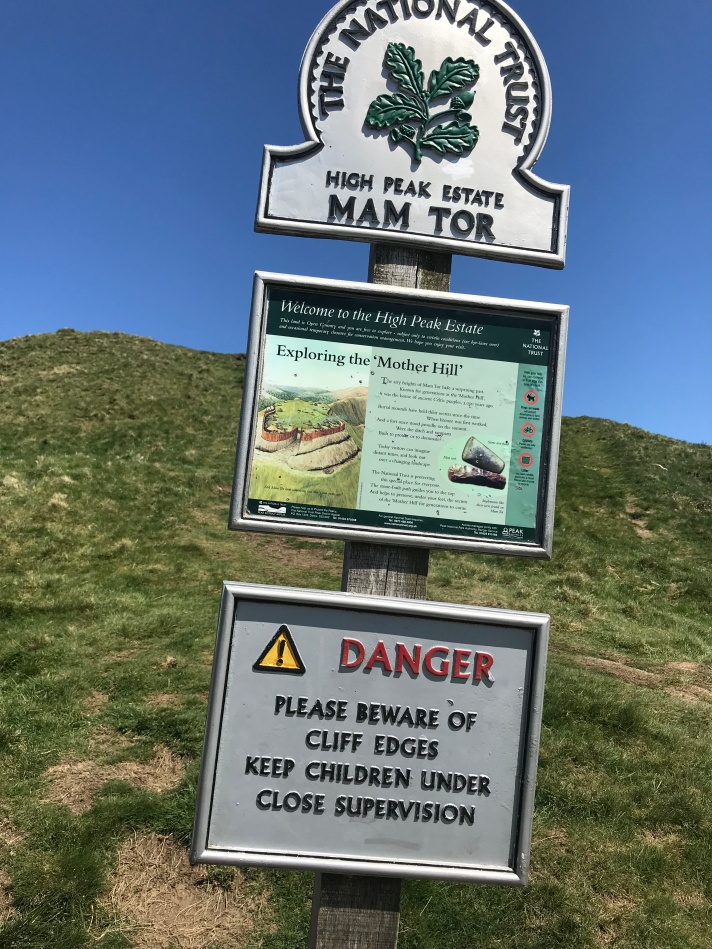 This was the busiest part of the route for obvious reasons but still not too bad.  Once I got to the top, there was definitely some serious endorphins released.  I sat down and just took it all in, some 33 years later, it was just stunning!

As I set off again, I started noticing my legs were hurting a bit.  There were two more climbs to do, including Lose Hill, which was pretty brutal.  What hurt more though was the sudden realisation of the descent I was about to do.  I essentially ran back down to the valley floor, which was really tough (must practice more technical downhills) and I then looked up and realised I would have to climb back up again. I had a quick glance at the elevation plot on my watch and my heart sank a bit.

I did have to adjust my pace to a fast hike with a little running where I could though.  I was still a broken man but I was going to do this, I wasn’t going to give up.

This next section was mostly farmland but on a steady incline. I made friends with a bunch of lambs who were playing around with me on the lane.  I took this silly running photo and I refocused my mind to enjoy the experience.

Then my water ran out, with about 8K to go, I had about 200ml of electrolyte left and that was it.  I wasn’t scared but I was a little nervous tbh, and annoyed with myself because this happened to the group on Saturday and I didn’t heed their warnings!

As I left the farmland the climb increased as I hit another section of moor, then back to the hard rock and ridges.  I was really tired now and at this point my vertigo hit me.  I had pushed it to the back of my mind for nearly the whole adventure but now I found myself off balance running down thin paths on the edge of steep drops and to be honest it was quite scary.  When I could, I ran as far to the right as possible but there were times when I just had to not look down!

When I reached the final peak, I was glad to see the trail heading down.  Again it was a hard descent but I was a bit more confident and I could feel the elation of finishing building. Then it was there, the final few 100m and I was done.  31K in about 5 hours!

I walked back to the car, cleaned the sweat off my face and changed T-shirt before hitting a local pub for Fish & chips and half an ale!

In no particular order, here are some thoughts about the day and how I could do better:

Don’t drive up. It knackers you out for a strenuous run. Should have got the train!

Talk to people who have been to the place before about the terrain and how long it will take you to run.

Plan your hydration and fuelling better.  I basically thought I would do this in about 3.5 hours, idiot!  I would have left some water stashed or found somewhere to get water if I had thought it through better.  I also would have put more food in the pack, I had room.

Don’t climb up a 33% gradient (off path) at the start of your first ever mountain run.  Again idiot! Take the path!

If you find yourself on the wrong path, turn around, there is no shame!

When opening gates, try not to stab yourself in the chest with the gate. I was in such a rush sometimes.

Study the route map much more clearly, remember the key points which could be tricky and technical.

Take suntan lotion!!! I had a very sun/wind burnt face by the end.  Again, I had room to carry it with me.

This run was an amazing experience and something I will never forget. The views were just immense.  Seeing Mam Tor brought me back to my childhood, which is something that doesn’t happen often anymore.

Yes it was hard, yes I was scared at times but the desire to run something like this again is even stronger.

Mountains, I be coming for ya!

One thought on “Learning the hard way: An adventure in the Peak District”