Back in 2015, when I bought my first real running shoes after a gait analysis, I also was kind of tricked into buying moulded innersoles.  I say “kind of” as they made them for free and I only had to buy if I liked and there wasn’t much pressure from the shop assistant.  I was pretty green back then, I guessed it was just something all runners did, so bought them.  I wore them for about 800kms and when I swapped shoes, I didn’t get new ones though.  Back in February of this year I thought about getting some new ones for distance road running, with a few marathons coming up!  I had seen various people and companies posting about different types, but I didn’t get around to looking into it properly.

In March I was contacted by a PR company about road testing and reviewing a set of innersoles that you can mould at home.  I thought this was a pretty cool thing and would save a potentially expensive trip to a running store, as I tend to buy other things as well. I was interested taking part for two reasons though.

At this point I have to say: I am in no way being paid to write this review. The words are my own based on road testing the product over the last month or so.

The product in question is made by SOLE, a Canadian company that have been in business for about 17 years.

They are called: Active Medium and cost £35 from here. 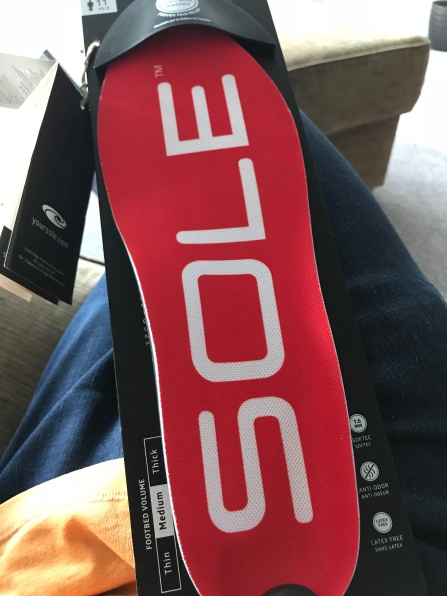 All the packaging is recyclable. Nearly all card board, with just a small bit of plastic that comes away easily for separating out. They are Vegan, if that’s important to you and the company is Carbon neutral.

According to the company website the benefits of wearing are:

As I said, I was sent these back in mid-March but I didn’t want to try something new just 3 weeks before the Paris marathon, so I put it off until afterwards, but this soon became June as I spent most of my time trail running in May and wanted these to be for the roads.  With a few more road runs in the plan, I decided it was time to break them in.

I read the instructions, which seemed pretty simple. Heat up oven, take regular innersoles out of trainers. Heat up the SOLE’s for short amount of time, place in trainers, step in and stand still until they are moulded to your feet.  Easy right?

Accept I am a bit of an idiot, I set the oven to the wrong temp and melted them, doh!

Like I said, I genuinely wanted to try something like this, so I decided to buy some new ones out of my own pocket. The purchase was simple, and they arrived just a few days later.

This time I set the oven to the correct temperature, heated them (2 mins), slipped them into my size 10 Asics Dynaflyte 2 shoes. Put my feet in and waited for them to harden (2mins).  Simple really!

A couple of days later I took them out for a little test on a Hills session.  Initially it felt weird, my shoes were a little heavier but that wasn’t much of an issue.  It was the arch support I suddenly had that was most noticeable and the shoes felt more fitted. A funny thing happened though, about 10mins into running I forgot I was even wearing them and I smashed out another hill session.

Over the next few weeks I ran some easy and tempo runs in them. Each time I had the same initial sensation when putting them on but as before forgot I had them on soon after.  The cushioned support is definitely a positive for me. I am a neutral runner with no issues of plantar fascia, but I have felt tired on my feet during long road runs during marathon training. I think these will definitely help with that.  I’ll have to hit the tarmac for some long runs come August, so will update the review then as the longest I have run in them so far is 75mins.

A couple of points worth mentioning. I tried to put into my Nike Zoom fly shoes (also a size 10) and they were too big. Also, my Salomon trail shoes are 10.5 and these were too small. I wonder if the company needs to look at making half sizes as well.

For me though, they fit perfectly into my Asics, so I am a happy runner, for 600kms or so that is, until I have to get a new pair!

Any questions let me know